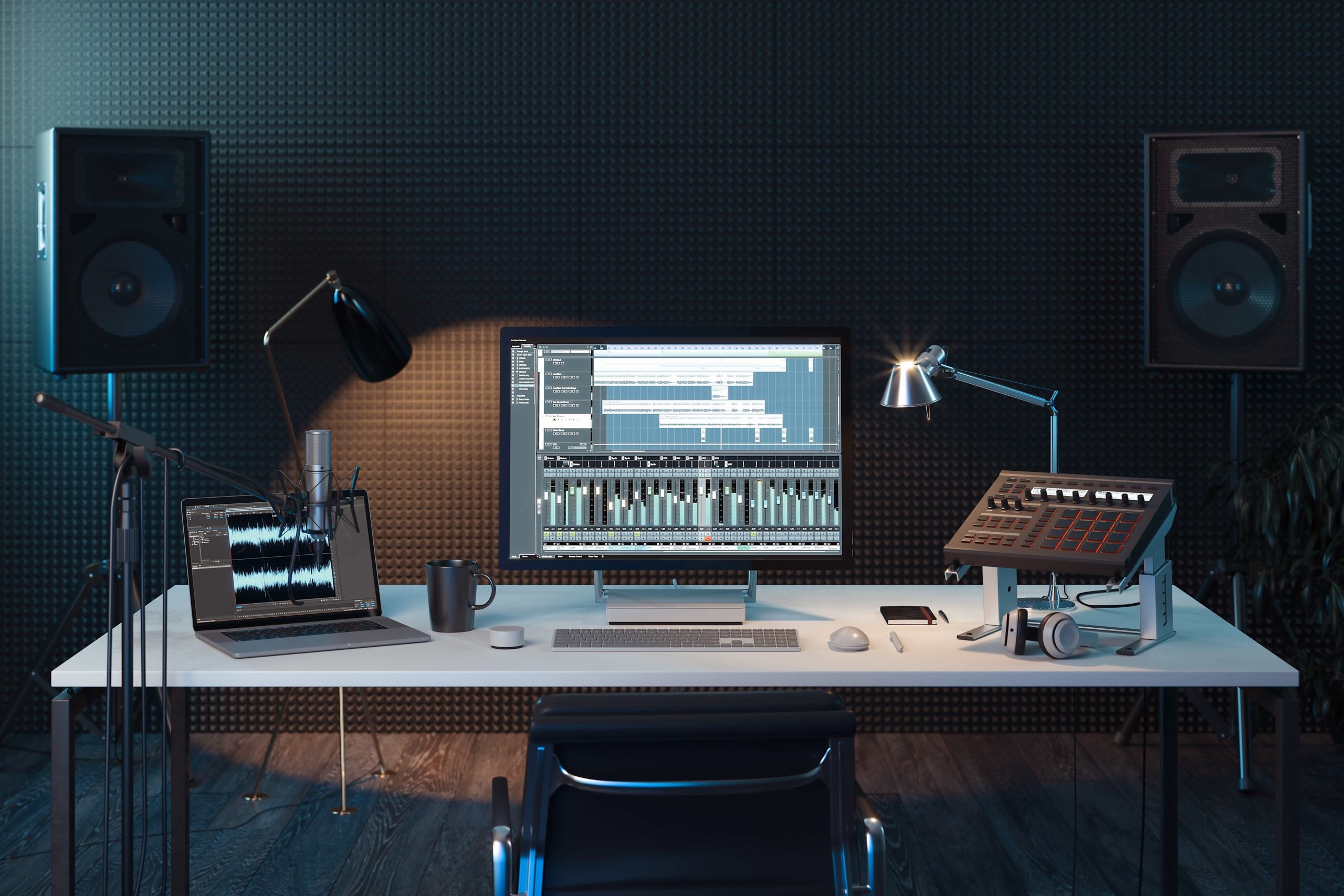 Apple’s Logic Pro X has been an industry standard for many years. For $199.99 USD from the Mac App Store, this program packs a ton of  features into an extremely powerful piece of software. Although available only for the Mac, Logic Pro X has a lot going for it. For one thing, it’s got a huge support network and loyal fan base, which makes it much easier to find answers to your questions either in user forums or through your personal network.

Regarding features, Logic Pro X is one of the best digital audio workstations out there due to its extensive list of features, including support for high sample rates, video synchronization, numerous software synthesizers, music notation functionality, and MIDI features. Logic Pro X is a favorite among composers as the program makes it relatively easy to manipulate data from MIDI software synthesizers in an intuitive manner which enhances the creative process rather than inhibiting it.

There are many resources for learning Logic Pro X, including many courses on learning websites such as Udemy.com or even on YouTube. And for those who aren’t sure if Logic Pro X is for them, another great option is to begin by using Apple’s GarageBand, which comes bundled for free with every new Apple computer. While GarageBand lacks much of the functionality of Logic Pro X, so much so that it can’t even be considered a “lite” version, the workflow is similar enough that one could use it to get a very rough sense of whether making the move to Logic would be a worthwhile upgrade.

As a synthesizer programmer for Broadway productions, another aspect of Logic Pro X that I find extremely helpful is the ease with which is plays with Apple’s MainStage keyboard programming software. I can prepare software instruments or audio files within Logic Pro X and easily import them into my MainStage quickly and seamlessly. If you find yourself doing a lot of keyboard programming with MainStage, I’d highly advise using Logic Pro X for your DAW.

Avid’s Pro Tools has been an industry standard for even longer than Logic Pro X. It’s nearly impossible to find a recording studio anywhere in the world which doesn’t use Avid’s Pro Tools. I’ve never been sure whether that’s because the software is just that good or if Avid just has a great marketing department. It would be hard to argue whether Logic Pro or Pro Tools is the best DAW given how they both excel in different (and many of the same) areas.

Many folks swear that Pro Tools has superior audio functionality to Logic Pro, though I’ve never encountered a function I couldn’t tackle in Logic. In fact, Dominique Messier of Studios Piccolo in Montreal (and better known as drummer for Celine Dion) has told me that he finds that he can do anything he needs to do in Logic Pro X and he has no reason to ever need Pro Tools. That said, knowing that a piece of software is an industry standard is a compelling reason to use it.

If you need to bring projects between various studios and various collaborators, working in a format which you know will make for easier collaboration is a compelling case for using that software. If you’re working in Logic Pro X and you need to bring your project to a studio which uses Pro Tools, you’ll need to consider how to best send your tracks, which often means bouncing all of your audio stems. Not a problem, but it can be time consuming, especially when you’re working with large track counts and multiple collaborators, and if everyone is using a standardized set of plugins.

One great aspect of Pro Tools is that the barrier for entry is considerably lower than Logic. There are numerous price points at which one can begin using the product as well as various upgrade paths.

The major drawback of using Pro Tools is the lack of MIDI functionality and software synths. It is in this area that Logic Pro X really excels. But if you’ll only be using the program for recording acoustic instruments, mixing, or mastering, Pro Tools has all you’ll need and then some.

Digital Performer (also known as “DP”) by Mark of the Unicorn (MOTU) has long been a mainstay in the music industry, especially among film composers and those who run backing tracks for live pop acts. This piece of software offers many of the advanced audio features that Pro Tools is known for along with heavy duty MIDI functionality. The video integration is also seamless in a way that makes this a favorite among composer who write for film and TV.

Another really useful feature of DP is its Chunks Mode, which allows the user to quickly advance between various tracks for playback during live performance. We used Digital Performer for this purpose during the Broadway and national tour productions of the show Priscilla, Queen of the Desert. Throughout the entire run, DP was rock solid. During tech and previews, it was easy to make edits on the fly, and after recording the backing tracks directly into Digital Performer, it was then an easy matter to edit and import them directly into the project we’d eventually use for the show.

MOTU also makes their own software sampler which rivals the functionality of the Kontakt from Native Instruments, known as MachFive. Of course, MachFive is made to easily interface with DP to be one’s sampler of choice for scoring. Unfortunately, with Kontakt becoming the industry standard, there aren’t as many sample libraries as one would hope which are native to MachFive. That’s no reason to disregard Digital Performer. It’s a heavy duty piece of software which makes for easy collaboration with Pro Tools as well. While some would call Digital Performer the best all around DAW, whether or not that’s true (it’s very subjective) I would certainly consider DP to be perhaps the most well rounded.

While Ableton is technically a DAW and an amazing piece of software, I’ll only give it an honorary mention here as it’s really geared for a slightly different purpose than the other programs. One can certainly record and edit within Ableton as one would do with Logic Pro, Pro Tools, or Digital Performer, but Ableton is really geared more toward live performance and arranging on the fly. That said, many operators of backing tracks in the pop world have been steadily gravitating toward Ableton away from Digital Performer due to the flexibility of the software. As long as you’re using warped clips, you have access to all of the fancy features of Ableton such as quick tempo and key changes, follow actions, etc, which are all fantastic for being able to stay flexible in a live situation. Unfortunately, this also necessitates recording, editing, and bouncing your audio from another application better suited for recording. Ableton also excels at live interaction during performance. For example, processing live snippets and manipulating them in realtime.

As a basis for a complete home studio, I’d still elect to go with Logic Pro X, Pro Tools, or Digital Performer unless a specific need dictated the use of Ableton Live. But for live performance, Ableton has long been the choice for DJ’s, track playback in the pop world, and is gradually replacing QLab for backing tracks in the Broadway world.

Ultimately, deciding which is the best digital audio workstation for your use will come down to a variety of intangible factors such as which user interface speaks to your way of thinking, your budget, and whether you need certain specific features such as software synthesizers, advanced MIDI features, or live playback. One thing I always advise people to consider is which software most of your friends and colleagues are using. That way, you can ensure that you have a solid support network when you encounter issues on your learning curve.

No matter which DAW you choose, commit to learning it in depth. You’ll be able to achieve the same results which any of the major commonly used applications as long as you take the time to learn the software. What’s important isn’t so much the question of which is the best DAW as how much time and energy you invest in using what you have to the best of your ability. I’ve heard amazing recordings that were completed using GarageBand, and I’ve heard terrible projects done using Pro Tools. Ultimately, it’s you who is making the music, not the software.